Yūki Hase (長谷 祐樹, Hase Yūki) is the male protagonist of Issuukan Friends. He is a high school student who notices that Kaori Fujimiya (Yuuki's classmate) is always alone and he endeavors to be her friend even after learning that she loses every memory of her friends each Monday.

When not in school, Hase wears standard teenage-looking clothes. Often, a collared shirt and shorts with rubber shoes.

Hase's easily seen trait throughout the whole series is his apprehensiveness. Instances in the media have depicted him as hesitant and almost fearful of moving forward and taking the first step. He is also quite simple-minded, as he can be pleased and displeased by very seemingly minor details. However, he is very headstrong and bold when he finally comes to a decision, and will not rest until he has seen his decision through.

Hase can get easily jealous and mindful of certain things, such as the instance when Kaori Fujimiya talked about Shougo Kiryuu so much that Hase was beginning to get jealous. In this regard, he is naive and impulsive, often acting before thinking when he is aggravated. He also sometimes jumps to conclusions, further worsening the situations he gets himself in.

However, Hase is kind by nature, and likes to socialize with people as a normal high-schooler would. He treats everyone with an equal amount of respect and kindness, save for people he has gotten to know better (in the case of Hajime Kujō, they aren't quite friends.) He tries to be considerate and polite as much as possible, though there are instances where his emotions can get the better of him and this doesn't turn out so well.

However, it has been clear that Hase puts Kaori's feelings first, deciding to start out as her friend more than once in the entire story. He desires a close relationship with Kaori, and this comes to him in the form of friendship. Through the course of the story, Hase has learned to appreciate Kaori as a person and a friend, and to support and spend time with her as a friend should.

Hase has feelings of protectiveness over Kaori, possibly due to his underlying emotions and feelings for her as well as the relationship that he currently has with her. He cares for her above all else, willing to injure himself or spend however long it takes to do something for her, as evidenced by the time she had misplaced her diary. Perhaps due to knowing that her relationship with him resets once a week, any protectiveness of Hase has doubled or tripled in effect of that knowledge.

Hase met Shogo in middle school when they were put in the same class in their first year. Hase approaches to Shogo after seeing that he is popular with girls but bluntly rejects them when they talk to him. Shōgo and Hase are friends and it would appear as though Shōgo takes on the role of the consultant and mature character in their relationship. Hase seems to find him dependable and reliable despite his cold, ruthless personality, often coming to Shōgo about his problems and troubles. There are times when Shōgo's attitude irritates Hase, such as the time of Shōgo's first meeting with Kaori.

Kujō and Yuuki were initially not under good terms, due to Kujō being the cause of Kaori's memory loss the first day he transferred to the same school as Hase and Kaori. Over the course of the story however, HAse learns more about what happened and is quick to accept Kujō into his group, much to Hajime's surprise.

Both Kujō and Hase are similar in that both have hoped that Kaori would consider them to be her special friend; due to this, both have been able to connect well. 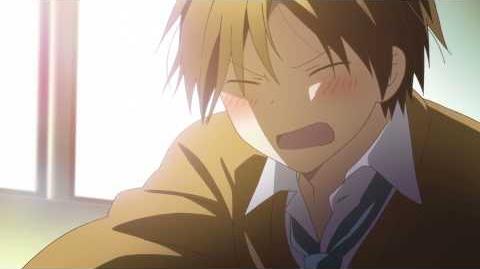